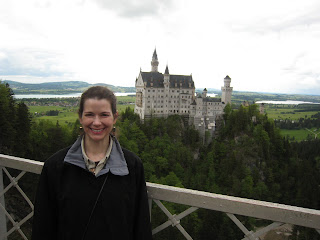 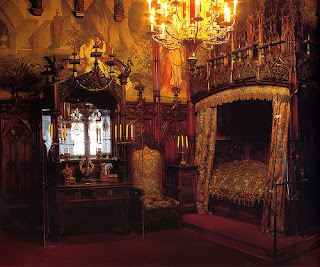 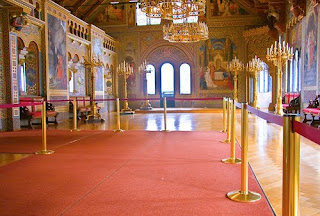 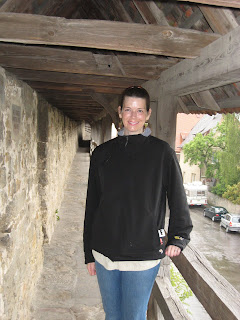 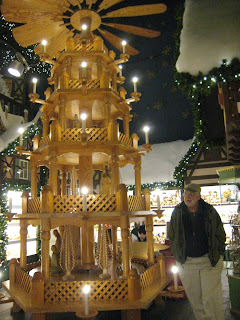 Alarm at 7:30. So hard to get up (still recovering from Post-Migraine-Wipeout). Glad I was mostly ready for today. Even managed to stretch some of my legs before breakfast. Feeling disorganized and a little tired.
After breakfast we checked out and Matt moved the car to a paid parking lot (nervous about leaving it on the street after checking out of the hotel). Started to rain. My Sonicare never recharged so Matt bought me a regular toothbrush. Looked at getting a new Sonicare, but they cost over 100 Euros here! My teeth will survive a few weeks without it.

ROTHENBURG CONTINUED
SEVEN VICES AND SEVEN VIRTUES
We stopped at the 7 Vices and 7 Virtues statues. They are only imitations - the real ones are in the town museum).


LARGE CHRISTMAS STORE
We went back to the bigger Xmas store and gawked at the enormous displays. Matt wanted to buy a bunch of ornaments, but refrained. My Dad’s Mom would have bought everything in the store. Matt said his Dad’s mom would have moved in.
We saw a huge rocking horse and giant wooden, fan on top, circulating tiered wood carrousel. Probably 10 feet tall. Never seen anything like it.


WALL AROUND THE CITY
Walked a little ways on the town wall. The top has a covered walkway. Matt noticed notches sticking out of the middle of the tiles on the wall walkway roof – a simple way to replace the clay tiles. Names of people who donated 1000 Euros or more get their name on the wall. Donations saved the town, starting in the early 1900's.

Drove a few hours in the car. Paid to use the toilet when we got gas. Worth the money. When you flush, an arm drops down, and the toilet top rotates – like a record player, which cleans the toilet seat.
We ate lunch in the car. For dessert, Mom passed around liquor filled chocolates (part of Marlies’s B. Day present for Mom was to load her down with food for our trip). I had a white and dark chocolate candy. Heaven! Managed to nap in the car.


FUSSEN
HOHENSCHUWAGAU & NEUSCHWANSTEIN – OUTER VIEW
Matt drove us to Füssen where "Cinderella's Castle" (modeled after the real white Castle Neuschwanstein). Mom and Dad toured it when they were here 9 years ago, so they toured Hohenschuwangau Castle (tan colored) instead.
H. Castle, in Bulgaria, was where "Mad" King Ludwig grew up. When he ruled, his pet project was having the Neuschwanstein castle built. He mixed and matched styles from various decades. Murals of Wagner operas and other stories were painted on the walls of each room. Ludwig was a Wagner roadie, except Wagner performed at Ludwig’s “house.”
The Castle N. was built for 17 years, then Ludwig was kicked off the throne because he wouldn't stop spending his family's money (or borrowing additional funds). To do this, they declared him insane. So not all the rooms were finished.
A few days later, he and his psychiatrist were found floating in a foot of water in a lake. The psychiatrist sent the guards away. Both men were excellent swimmers. No one knows if the deaths were suicide or murder.
Hohenschuwagau Castle (which my parents toured) was where Ludwig grew up. Mom said it really was like a house. N. Castle was more like a play area.
We arrived early. You have to pick up your tickets an hour in advance (so you can spend money in the tourist shops while you wait). Wandered the various gift shops. Got a book for Becky (house and cat sitting for us) with pictures of the four castles Ludwig' lived in. Matt was hungry, so he got a pretzel and I got an ice cream bar. Mom and Dad took off and we arranged to meet back at the gift shops in 2 hours.
Matt founds a series of post cards for both castles, and since you aren't supposed to take pictures inside, I got that, plus a bookmark (for my collection). My feet were sore before we started the tour.
While waiting in line for the bus to Mary's Bridge I looked through Becky's book (really neat – might get one for me). The bus was crowded, so Matt let me take the available seat. He’s such a gentleman. I married James Bond.


MARY'S BRIDGE
From the bus, we walked along the road (about 10 minutes) to Mary's Bridge. It’s a long bridge created from wooden planks and metal that spans the space between two cliffs. It offers a great view of N. Castle. The wooden planks move a little as people walk on them, which made Matt nervous. (He later said in the back of his mind, he was always concerned someone would push him off the bridge.) Didn’t bother me at all.


NEUSCHWANSTEIN – TOUR
Built from 1869-1886.
Walked quickly to N. Castle and waited for our number to show (indicating it’s time to get in line for our tour). I stretched and took a photo of Mary's Bridge.
Throne Room - The enormous chandelier could be lowered to the ground. The tiers of candles lowered so they would all be on the same level, making it easy to light the candles quickly. I asked – the stones on it have always been imitations. No throne in the room (because it was never made).
Swan Room – A living room with over 100 swans painted or carved. There’s even a swan doorknob.
Cave Room – Looks just like a cave. Stalactites hanging from the ceiling. Even the back of the door looks like a cave wall!
Saw a phone from 1884 that the king really used.
Singing Room – Stage in the front, long room going back. Seats about 400. Every year, for a week, they have a concert. Wagner was the only guest in the castle. Ludwig loved hearing his music, watching his operas, and became his patron.
We watched a few minutes of the BORING movie then walked out.
Kitchen – Hot and cold running water, an auto-turning spit – King Ludwig lived built the Bill Gates mansion of his time
Saw a model Ludwig created of yet another castle he planned to build – it would have put the N. Castle to shame.

I don't think Ludwig was really crazy. Might have been depressed or bipolar (more likely). Mom thinks he might have been manic. I think he'd have made an awesome actor. He belonged in the world of make believe. He often acted out scenes from Wagner's operas. Matt said he was like Walt Disney, but a few centuries before his time. (Though Ludwig was very private, and Disney created for the world to enjoy.)
Looked through my photos while we waited for the bus. Took a picture of a wooden map showing both castles. (Ludwig looked through a telescope from H. Castle to watch progress as N. Castle was being built.)

Mom and Dad were waiting in the gift shop area. After some discussion, we ate dinner at a restaurant that was a five minute walk away. Dad found it while wandering.
We drove past cows with big cowbells in a field and could clearly hear the brass bells around their necks. My German grandpa put bells on his cows (so he could find them in the 5 acres of trees when it was time to bring them into the barn).

Drove to Fussen town proper. I pointed out the funky water fountain sculptures. Tall rectangles of stone. The top square rotates. Just under the rotating part, water shoots out and falls down. There are 7-8 of them. Amazing. I was as impressed with them as the castle.
Chatted with Mom while Matt and Dad walked around to figure out where our hotel was. Mom said he told her, with tears in his eyes, that he wants to keep learning German because now he belongs to a German family. (When Mom told Marlies this, and she went, "Ohhhhhhh!") Over dinner we talked about the best time for Nico (who wants to spend a month in an American school) to come to the U.S. For both countries, school starts in Sept. I suggested summer camp. Mom thinks that would be good but will look into it.
SO TIRED. When we got to our hotel, and got into our room, Matt left to get a beer. I prepped some for tomorrow. He came back to told me there are real gelatos (got addicted to them in Italy a few years ago) around the corner. After 10 minutes of debating the 20 flavors I happily devoured a double scoop. Yummy!
DIET TIP: Tour Europe. The walking more than burns anything you eat.
On Matt’s laptop, separated photos into days, dates, and places and worked on my travel diary (which takes 30-60 minutes to edit for this blog).
Got to bed between 11-11:30.
Posted by Diane at 8:29 AM