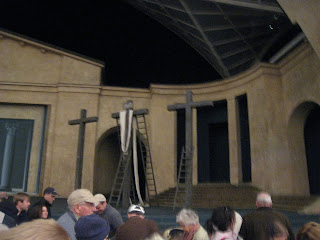 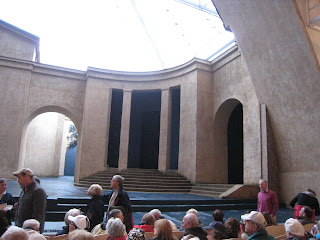 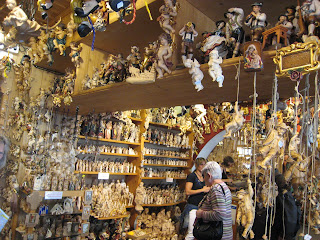 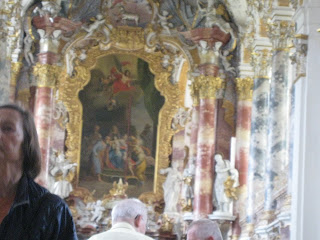 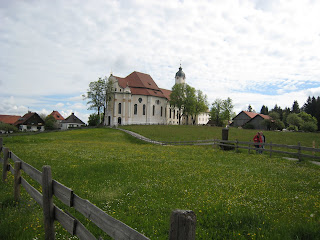 Matt woke me at 7:30. Bright, sunny day (though it turned out to be temporary). Getting more and more tired. Wasn't this bad when I was in Italy 3 years ago. I know it’s just the stupid accident from a year ago, taking its toll. Feel like I'm on a boat, going up and down on waves. But head is fine. Just wish I had a day to sleep. Still, every month I’m better than the month earlier, so eventually I’ll be back to normal. Not everyone is so lucky.
Wanted to wash my hands and the faucet in the sink wouldn't work! I was fine earlier. Figured I was doing something wrong. Matt couldn't get it to work either. We learned our room, and Mom and Dad's room, suddenly had no water service. Glad I showered last night.
Buffet breakfast. Matt loaded the car. I had a few minutes wait so laid on the bed and rested a few minutes. Bliss! We finally got in the car. Mom suggested I get rid of the bananas, so I gave them to an American family also heading out to Oberammergau.
30 minutes later we arrived at….

WIESKIRCHE CHURCH IN THE MEADOW
Drove through farm land to a large, fancy church. Seemed out of place. In 1738, a statue of Christ after his flogging was created for a parade. Deemed "not fit for public display in a church" (too horrifying) it was stored in a barn. The owner saw wet on the face one day and claimed the statue "cried tears".
Pilgrims came to see and were healed. So many came, that a small chapel was erected to hold the statue in 1739 (still on the property - we saw it after touring the big church).
Even more pilgrims came to view the statue. The Zimmermann brothers were commissioned to build a larger building from 1745-1754. (We saw at least 3 churches they designed on our trip.) Grand and gorgeous. Even the choir loft was spectacular.
No photos allowed so Matt bought me a book about the chapel. Fabulous pictures. Back in the car, I looked through my new book and read interesting bits out loud. (Earlier my parents wondered how such an amazing church came to be in the middle of a farmer's field, rather than in a town or city).
30 minutes later we arrived in Oberammergau.

OBERAMMERGAU
We arrived too early to check in, so wandered the town. False 3-D architecture, due to a clever paint job outside some buildings.
There was a shop filled with carved wood objects. FILLED! Crammed with carved objects on shelves. Even mountain climbers clung to ropes suspended from the ceiling.
Went to a building where craftsmen worked so the public could watch. Saw a man carving a life-size lamb and a woman painting butterflies on glass.
In The Pilatus House, a museum, I took a lot of pictures of the Way of The Cross. 16 little pictures of Christ carved into it.
There was a yard with a large, brown guinea pig in it. Mom and I asked the three German kids (4-8) what "guinea-pig" is, in German. "Small pig" is the translation. In German, I asked if it was a brown guinea-pig, and they replied, "Yes!" Sort of a silly discussion, but when it overcomes a language barrier, it’s neat.
Meandered to the car. Unloaded into our rooms. Finally time to eat lunch (already paid for with our Passion Play ticket package). While eating, we decided to skip Vienna, to save a day of traveling but not seeing anything.
Back in our rooms, we rested. I typed Diary really fast. Matt figured out what to do instead of Vienna. Falling asleep and had time for a quick nap. 20 minutes of bliss.


THE PASSION PLAY – HISTORY
In 1633, during the Black Plaque, after people in Oberammergau started dying, the town prayed, and promised God if he’d save them, they’d perform a Passion Play every 10 years. They kept their promise. They perform it for 100 days, from May – October. You have to have been born in the town, or have lived in it 20 years to be a part of the play. 4000 people in the town. 5000 people each day in the audience. The town does everything – crew, cast, singers, and orchestra. This isn’t even what the town is known for. Over the centuries, they made money by selling wood carvings.

THE PASSION PLAY – ACT I
No picture-taking allowed during the play (for obvious reasons). The play is in a huge building. The end where the stage is can be open to the sky, but is covered with a top that can be, I think, removed. It's made of a metal skeleton that has plastic over the top. It was also used to create the sound of thunder after Christ died. It doesn't join the walls, so air and wind blows in.
We followed the dialogue via English text in books (provided as part of the package we paid for). There's a chorus of probably 40 singers, wearing white robes with strange hats that went over their ears, were flat on top, but pointed in the rear. Great singing and acting. Probably 50 actors played the townsfolk, plus 20 soldiers (who sometimes monitored crowds from the top of the building wall), 20-30 priests.
Judas was portrayed as expecting Jesus to establish his Kingdom on earth and destroy the Romans. In his mind, Jesus just abandoned his disciples and everyone by not ruling and freeing the Jews. He didn't expect the priests to have Jesus killed. The actor actually used his long scarf (used as a head covering when in the temple, and praying) as a rope to hang himself in a tree. Impressive acting. Outstanding!
Jesus rode a live donkey. Some rulers rode horses. During the trial before Herod, there was an adult and baby camel. When Jesus was in the temple, there were sheep and goats. The animals were quietly controlled by adults. There were also lots of kids in the cast.
When Jesus got the attention of the crowd during the "driving the money changers out of the temple" scene, he broke a large, red pot. Outside the playhouse, there's a tall glass case with broken pottery (I assume from the play).
When the disciples prayed, they spoke in Hebrew. Jesus actually washed every single disciples' foot. He cupped water out of a bowl and onto the feet, then wiped with a cloth. Sped the process up, but still took time, and no one spoke while he worked. Impactful.
At the beginning of each scene, the choir sang 5-10 minutes. While they sang, they’d part in the middle and step back. Then the curtain behind them would open and show actors frozen in a scene from the Old Testament. They held their position for a minute or two, then the curtain closed, the line of the choir closed ranks as they continued singing. The scenes were impressive. Nearly every scene had at least one angel in it.

The first act was three hours. During the 3 hour intermission, we ate dinner. Took the waiters about 30 minutes to find us a seat, and longer to get us food.
We still had time before Act II, so I took a luxurious shower.

PASSION PLAY – ACT II
Took photos outside and inside the building, before the play started (the usher said it was ok).
It started to rain and there was thunder during one of the priests’ discussions. The actors shouted, but they were still hard to hear for about 5 minutes. We could see the rain running down the plastic.
The soldiers had their backs to us, hiding what happened as they pounded nails into the crosses. When the crosses were raised, it looked like there were thick nails going through the middle of bleeding flesh. Not sure how they did that. When the soldier plunged his spear into Jesus side, it wrinkled and broke through the “skin”, and liquid poured out. The actors on the crosses were in harnesses, but I couldn’t see anything breaking the illusion. The actors still had to hang on their crosses for 30 minutes. Couldn’t have been comfortable.
As it got darker, it was harder to read the English translation in our books. The last half an hour, we finally just shut them. The wind blew in and Mom shared her blanket with me. I was cold, but the play was worth it.
At the very end, Jesus walked from the back of the stage, cleaned and robed, and stopped in the center of the stage. None of the actors came out for a curtain call.
Act II was supposed to take 2 hours. We got out 3 hours later – at 11:00. Felt sorry for all those who were bussed into and out of town.

Great to snuggle up to Matt and get warm. (Snuggling with Matt is my #1 favorite means of warming my body.) Fell asleep around midnight.
Posted by Diane at 10:30 AM