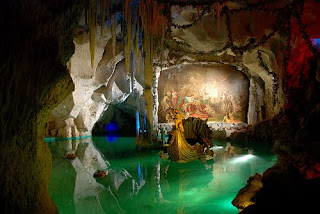 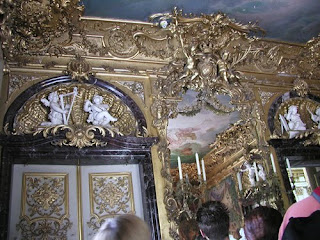 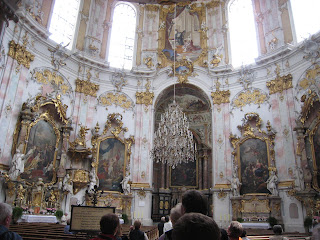 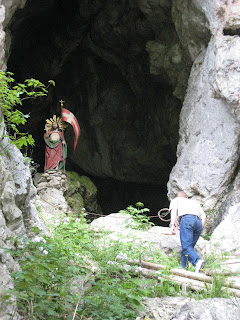 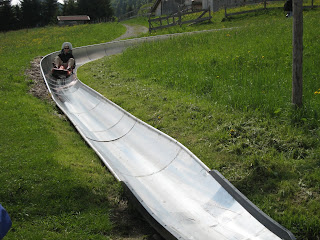 Got up, stiff and sore at 7:00. After breakfast we packed up the car, and left it in the hotel lot.

OBERAMMERGAU
OBERAMMERGAU MUSEUM
3 floors. Bottom floor contained wood and paper dioramas from the Bible – generally the Nativity Scene or Jesus’ death. They were created by the townspeople as a devotion to God. Some were centuries old.
Second floor had fancy wood carvings & toys that were centuries old. There was a wooden "backpack" the seller could wear that displayed toys all over it. There were some hilarious toy snails on wheels. “Mommy! I wanna go play with my snail!” Saw a large diorama (on a 8x4 foot long table) of a king's marriage parade, a wooden clock with wooden gears, and tiny carvings that fit inside walnut and hazelnut shells.
The top floor contained Passion Play history and memorabilia. Photos of actors, the oldest surviving copy of the play (from the 1600's I think, old costumes, and props.
Matt bought me a hardcover book with pictures from this year’s Passion Play.

LUGE RIDE
5 minute drive from Oberammergau. 1-2 people per orange plastic “car”. Two hand brakes – one on each side, are pulled or pushed to slow or speed up the car. Pulling back slows it. Pushing forward speeds it more than leaving them alone.
Matt went first. He said next time, he wouldn't brake around the curves so much.
I went next, and used the brake a little, unsure of how bumpy or fast it would go.
My parents followed and, with silly grins and bright eyes, we universally decided to go again. My second trip, I really went for it. I highly recommend it to everyone. Mom’s not really into roller coasters, but she loved the luge.
There were goats standing on big rocks by the bottom of the ride. 3 cows near the top completely ignored us. Watched one cow resting on it’s side while another gave it a bath – just like cats.


JESUS IN THE GROTTO
After one minute of driving, we whizzed by some hikers looking at something high up on the side of the mountain, so Matt turned the car around. It was a very crocked path, medium steep, with logs at the end of each ground "step". At the top was a cave with a 6 foot tall statue of Christ.
Matt raced up, but didn't make it all the way before he had to stop, panting. I walked it. Matt said later it bugged him that I got the top the same time he did - by walking. The statue stood just inside a cave, surrounded by little red candles. In front of the cave, somehow, someone put in a large wooden bench, which Matt and I sat on.
Took some pictures, went back down, then drove another 5 minutes to…

ETTAL
Ate lunch at a café where you selected meat, cheese, and bread you wanted. There were people from a British tour group there. The tour guide bought a blueberry something or other, which he told a passing tour guest was "vegetarian". He declared it "a treasure". I decided to get me a slice when we ate our dessert.
We stopped at a street vendor that had a booze booth set up. Matt examined the bottles with interest. The local monks make it. Matt perused, but wanted to see if they sold it cheaper at the monastery.

ETTAL MONASTERY AND PILGRIMAGE CHURCH
In 1832, the Holy Roman Emperor Louis the Bavarian, returned from Rome with a statue of Madonna and Child that was supposed to be miraculous (although no one knows why). It was made in Pisa around 1300. Because he was in political and financial trouble, he decided to have a monastery. He left the statue as a centerpiece to draw crowds. It worked. The church became famous, the property was seized during the French Revolution, but then returned to a house of worship.
We walked through the church, which retained the original entry door from 1350. The picture at the top is of Emperor Louis and his wife, Margaret, directing visitor’s attention to Christ.
The inside was AMAZING. Fancy gold decorations against white paint. Prayer stations. The domed ceiling (230 feet high) has a fancy painting that shows Benedictine monks worshipping the Trinity. Huge chandelier in the middle. Statues of saints either having holy conversations with each other or singing praise to God.
Fancy altar area that actually recedes back so it's a separate room. It was roped off. On the altar is the small original “miraculous” statue of the Madonna, holding a baby Jesus.

ETTAL BAKERY
We each selected a different dessert, then shared, except Matt, who ate all of his biggish, fancy cookie, by himself. Dad had a fancy apple pie (and coffee). Matt also had coffee. Mom had a layered white and choc. cake. I ordered the blueberry tart thing.
I've been really looking forward to the desserts here, but honestly, they don't do much for me. The chocolate is pretty good. The pastries aren't as sweet. The bread is probably a little better than in the U.S., but nothing that makes me want to just scarf it down. This is probably a very good thing.


LINDERHOF CASTLE
Where "Mad" (probably manic) King Ludwig spent most of his time, because it was the only castle he designed that was finished. Certainly the most opulent of them all. He loved 1700's rococo and super fancy décor – like at Versailles.
Ludwig collected vases, and there are 120 in Linderhof. He also loved (and collected) swans and peacocks. There are two 4 foot high, porcelain peacocks. When they were placed outside, Bovarians knew King Ludwig was residing there.
The fancy "gold" adorning the walls and ceiling is really carved wood, covered with a thin layer of gold. This still amounted to a lot of gold. Estimated worth today – about $50,000. (So if any of you millionaires would like to save a little money, this is a great trick.)

THE MUSIC ROOM - Contains a piano-organ that wasn't ever played because Wagner never got to come over. The "tapestries" on the walls are actually large painted murals on cloth. Hard to tell the difference by looking at them though. One of the large peacocks stands next to the piano-organ.

SILVERED SERVANTS' ROOM - The next room is "silvered" rather than covered with gold. It's for the servants, so smaller than the other rooms.

THRONE ROOM – The cloth around the throne is "needle painted" - 100 stitches, using gold thread, to make up 1 centimeter. Took 2 years to complete all the needle painting.

BEDROOM – Ludwig was tall for his time – 6' 1", so the bed is larger than normal. It's also bigger because in Versailles, the king would actually hold court from his bedroom. Ludwig wanted to be a Louis XIV mini-me, but he was reclusive, so used the room only for private purposes. He never married, though he came close once. The window across from the bed looks out over the various statues and long waterfall built into the hillside. Best view from the house.
The enormous candelabra in the bedroom holds 508 candles, but wasn’t ever lit, to preserve the fancy painting on the ceiling.
Love the fancy, painted porcelain mirrors on either side of the window facing the bed.

MIRROR ROOM – Ludwig wanted a replication of the Versailles Hall of Mirrors, but didn't have the space, so his clever architect created a room where the mirrors faced each other, creating reflections of never-ending hallways of light. When the candles were lit, it was spectacular. Once a year, on Ludwig's B. Day, there's a special night tour of the palace, and artificial candles are "lit" to create the effect. Ludwig usually slept during the day, so greatly enjoyed the effect of the room.
The most expensive object in the palace is the chandelier – made of one piece of carved ivory.


LINDERHOF GROTTO (the artificial cave)
After a 15 minute walk uphill, we got to the grotto, where we waited for a guided tour.

ENTRY ROOM – 5 ovens heated the "caves" to 75 degrees F. I took a picture through a crack, where you could see the oven bricks. Another sight seer, pointed out some artificial crystals.

MAIN CAVE – Largest artificial cave in the world – 270 feet long and 14 feet high. Has a man-made lake that could be heated to 85 degrees F and included an artificial wave machine. Servants held colored glass in front the artificial lights, so the pool area would be bathed in red or blue light. Flip a switch, and the artificial waterfall gushes. Ludwig’s orchestra would play songs from Wagner's operas while servants rowed him around in his fancy boat.
Matt said Ludwig was just 70 years ahead of his time. He'd have loved Walt Disney.

Back in our rooms, we snacked on foods. Matt drank2 bottles of monk beer with Dad and played 3 handed Pinochle with my folks (he got a hand with Aces Round and a run). I tried to sleep, and finally gave up and did Diary until dinner.
We shared an apple strudel with a scoop of vanilla ice cream. Strudel tastes basically like apple pie. The ice cream here is better than in the U.S. Mom and Matt said it tasted of butter and cream. Matt bought a 5 pack of small bottles of hard liquor the monks made. Sample sized. We sampled one that tasted of lemon and chamomile. Bottle #2 other tasted like a port (it was red). Mom and I liked #2 best. Matt and Dad liked #1 better. We all agreed both were tasty.
I got ready for bed and stretched - felt wonderful. Read some short sci-fi stories before I fell asleep.
Posted by Diane at 10:48 AM