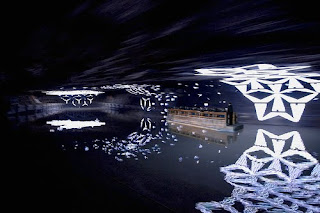 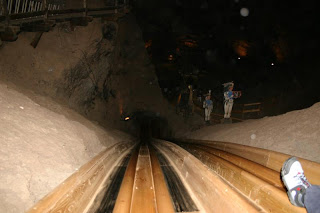 Up at 7:00. Cloudy day, so no reason to do the gondola ride.
Gave Mom her B. Day card. She said the best gift we can give her is to spend the day with her in Germany (which is good because I haven’t found anything worth buying for her over here). FINALLY got my suitcase organized so I can find my clothes and stuff without emptying everything out every time. Matt and Mom figured out what to do over the next few days. I did Diary and downloaded photos to the PC and backed up.
I brought a small bag of candy to pass out to people helping us on our trip (waiters, hotel workers, etc.), so figured out how to say, "Would you like a candy from the United States?" in German and worked all day on memorizing it. The word for "United" in German has 4 syllables - it's a doozy. Wrote the key words phonetically and kept looking at the paper all day.
We drove a lot today, particularly in the morning. Mom went nuts over the mountain view (we were so high our ears popped). She loved the trees, meadows, snowy peaks, houses, etc. I get more excited about water falls, so she’d point them out when she saw one. (Easier for her to do, since she sat in the front.)
We grabbed a snack at a gas station. I ate a sandwich, with pretzel bread. A little salty, but tasty. Dad's coffee cost way more than the pastries. Coffee costs a LOT here.
We drove into Berchtesgaden and purchased tickets to the salt mine. We had two hours until our tour, so we ate lunch at an Italian restaurant. We were the only customers. Most places close on Sunday. I ordered a pizza with ham and pineapple. Mom's pizza was like mine, but her "Tropical Hawaiian" pizza also had cantaloupe cooked on it. A little odd, but interesting. I tried out my “Would you like candy from the United States?” German on the waiter. He chose two chocolate candies (the fool – American chocolate sucks compared to Europe’s).
We drove back to the salt mine parking lot to get in line for our tour. As we walked to the mine, Mom talked about how well European kids behave. They get along with adults, joke around with them, and tend to sit on adult laps more. She also noticed that Germans eat ice cream, even when it's cold and raining. (With such great tasting ice cream, no wonder.)

SALT MINE
Waiting in line, I was pleased to see a group of deaf people (always gets me excited, since I taught myself sign language). They weren't on our tour though. Looked like they were using European sign lang.
We wore salt miner's jumpsuits, then waited for the train to take us into the mine We were given an audio player that was automatically activated at specific areas of the tour. So when the tour guide spoke German, we listened to the pre-recorded English version. Matt noticed our batteries were low, so we got fresh ones. In the middle of the second audio track, mine device suddenly started hissing loud static. Broken! I gave it to our guide and Matt shared his with me.
We entered a huge cavern where we watched projected lights and lasers put on a “show”. Then we got to slide down 2 long wooden railings to the next level. Each person sits in front of the other, holds onto the shoulders of the person in front, with our legs straddling the railings. Then we leaned back, and let gravity take over. Our butts started warming up about halfway down, but we slowed down as the slide leveled off at the bottom. It was awesome!
In the middle ages, salt was so precious, it was called "white gold." Mad King Ludwig's architect designed a cool tunnel of arches in an upper section of the mine. It’s made of alternating white and red salt rock. Red means the salt has magnesium in it. White "rock" is 100% salt.
Originally, the mine area was covered by seawater. There are 5 levels in the salt mine. The bottom level is where the real work happens. We didn’t go down that far, but did watch miners on a monitor.
Only 50% of the rock contains salt. They drill the area to see if it's worth mining. If there’s enough salt, they pump in water. Over the next few years the salt dissolves. Every two years, the brine (saltiest water is on top) gets sucked up. More water is flushed into the area and over time, the process creates a pit. The process is called "wet extraction". There are 28 brine pools in the mine right now.
We walked into a room filled with enormous white plastic "salt" crystals that had interactive information screens and displays. One display had various containers filled with varying amounts of salt to show how much salt people eat in a year, how much is deadly if consumed at once, how much is in an average meal, etc.
We saw a huge bronze pump that was built to pump brine 350 meters uphill. It worked without breaking down for 110 years. Then (yippee!!) we took a second wooden slide to a lower level.

MIRROR LAKE – Huge salt water lake that reflects light so well, Matt thought he was looking at the bottom of the lake rather than a reflection of the ceiling. We got on a raft, which took us to the middle of the lake. Then they turned off the lights so we could watch a light show. Electric lights created geometric patterns on the cave walls, which reflected into the lake.
The last section of the tunnel had fancy memorial plaques in walls. Commemorated people who died. We took an elevator up a few levels, and then got on the train. Before the train took us to the surface, everyone got a free tiny salt shaker of mine salt. Just before we reached daylight, speakers release a muted explosion.

Dad, Mom, and I had ice cream and waited for the pouring rain to die down. When the lighter cloud patch was nearly overhead, we split for the car. Our jackets were still soaked.
We drove back the way we came and picked a hotel. Since we skipped Venice, we didn’t have a hotel booked. We really lucked out. It cost $30 more than our average hotel fee, but was worth it. It was run by a family. The wife wore dresses that made her look like Snow White, and her husband wore traditional German clothes. She spoke no English. He spoke good English. Their daughter (who also spoke English) and her 3 young kids lived with them. The place is like a Bed &Bath.
On top of one of the surrounding mountains, we could see The Eagles Nest (a lodge gifted to Hitler, though he only spent 11 nights there).
We sat outside Mom and Dad’s room. Mom filmed clouds moving over the mountains while Matt and Dad drank beer. I updated my notes from the tour, then, using my limited German, handed out American candy to the kids (and adults) who made us feel so welcome.
We walked about 1/8 of a mile to a restaurant that was, fortunately, open. The female cook spoke English and translated the menu. Her husband (our waiter) spoke a little English. I asked them the German word for Birthday and then told them, in German, “Today is Mom's Birthday.” The couple smiled and got excited. Then the husband brought out glasses of Italian champagne (on the house) and the 6 of us toasted Mom.
We talked and I learned more about Matt’s job working at Corey’s Slug and Snail Bait, how his uncle and aunt started the company in their garage, as well as the various jobs my dad had growing up.
Mom and I ordered ice cream for dessert. I had vanilla with blackberries (and 2 cookies, which I gave to Dad and Matt). I got another spoon so Dad could sample mine, and told the waiter, in German "My Dad would like my ice cream," and he laughed.
Dad got apricot and Matt blackberry liquor. Nearly 100% alcohol. Mom and I had a tiny taste of each. (We preferred the ice cream.) Matt LOVED this evening – spending time relaxing, eating, and swapping stories with loved ones.
On the walk back to our hotel, Matt again commented how much the weather, trees, humidity, temperature, clouds, even the smell, reminded him of working in Sitka, Alaska for a few weeks each Sept. Nice to more fully understand a piece of his job experience.
Posted by Diane at 7:19 AM