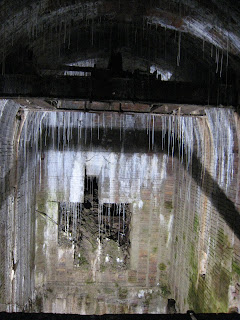 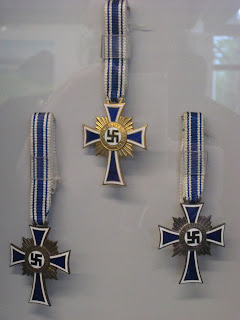 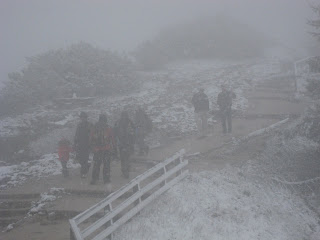 When we arrived in the dining room, the wife rattled stuff about the food to us in German, using gestures and pointing to clarify. I told her, in German, that her house was fantastic, and that I really liked the food. She beamed. She also let us know her homemade jelly was (of course) for sale. Hungrier than usual, I ate a large breakfast.
It snowed on the mountains last night and was colder today. The temperature dropped as we drove farther up the mountain. We stopped at the information area to figure out how to get to The Eagle’s Nest.
We walked to the bus depot. Cold. Matt couldn't believe I didn't put on a sweater this morning. I figured we'd be mostly indoors – the Eagle’s Nest is a chalet. Thought I’d look out through the windows. Matt and Dad get tickets, and then we had a 25 minute wait for our bus (in the warm gift shop).

THE EAGLE'S NEST
We got on a bus that drove up switchbacks and around the mountain. The bus drove us 2,300 feet up a 4 mile long road. Hilter's "retreat" is 6017 feet above sea level. It was given to him as a B. Day present, though he only actually stayed there 14 times.
Water condensed right above me. Matt protected me with his arm until I snagged a napkin from Mom and swiped at the drip once a minute. It started cloudy-foggy and raining. The View was hard to see. The higher up we went, the harder it was to see anything. About half way to the top, the rain turned to snow, which was accumulating at the top.
We got off the bus and walked through a brick access tunnel 406 feet straight into the mountain. We waited for the elevator in a brick domed room. The inside of the elevator was all shiny brass - even the ceiling. It's amazing! The elevator shot up 406 feet in 41 seconds.

It was FREEZING – literally. I clenched my teeth to keep them from chattering. The wind blew as snow fell in thick fog. We couldn't see more than maybe 20-40 feet. I took a few photos as quick as possible.
Inside the entry to the building B&W pictures show stages of the building, as it was built (by Jews performing slave labor). The inside is beautiful wood paneling. No furniture. After the war, the locals came and snagged it for themselves. It's scattered all around the surrounding villages today. One guide’s grandparents had one of the mantles.
Matt and Dad wanted to walk the 100 yards up the hill outside where there's a cross memorial. I took a few pictures of them before they disappeared into the clouds and snow. I took pictures of the few rooms we had access to. There's a big dining area for the restaurant. The original purple marble fireplace is still in the room (with chips people snagged as souvenirs after the war).
We took a bus 10 minutes earlier than we'd signed up for. Mom's video camera malfunctioned, so I took a bunch of pictures through the window (whenever there was a "tree free" area). Got some good shots.
Back at the gift shop, Dad bought a book on the history of The Eagle's Nest. We ate lunch in the restaurant by the information area. Matt volunteered to snag my sweater from the car (since he was getting a sweatshirt for himself, buried in the luggage). We ordered and off he went. My hero! He even stuck my sweater inside his coat so it'd be dry and warmer.
Mom had hot choc. Not very sweet (like the American version), but warm! Dad wanted an American burger with fries. After lunch we had dessert. The apple strudel tastes like apple pie, which I've had plenty of, thanks to the apple trees in my parent's yard. I ate a cherry cake, which was ok. The small scoop of vanilla ice cream was better (plus I snagged most of Matt's).

DOCUMENTATION BUILDING
Another walk (that seemed longer because of the cold), to a building that had pictures taken before and during the war. All the descriptions were in German, but we rented one English audio guide, and passed it around.
Saw propaganda for joining the Nazi's, about Hitler, ways to be a good German, photos from after and during the war showing Jews (alive, dead, bodies of skin and bones). Pictures of Hitler with kids (“kid-friendly” Hitler – scary!) Toys from the era, including a horse race gate, with little wooden horse heads in each, bobbing around. Memorabilia created and sold during the war. Women were given medals for birthing German kids:
Bronze – 4-5 kids
Silver – 6-7 kids
Gold – 8+ kids

BUNKERS
Underground cement and brick tunnels and rooms where Nazi military stayed during bombing. They were supposed to retreat to it if they lost the war, but Hitler refused and decided to commit suicide instead. (Also, Allies bombed the area above the bunkers, which probably made it hard to get into.)
Matt showed me a small room with three holes half way up that they put machine guns in. If you look up through one of the holes, you can see stairs leading down to the tunnel.
Another "room" that used to be an elevator shaft, had water dripping from the top of the roof, which formed stalactites.

Back in the car, as soon as I warmed up enough, I got sleepy and had to nap.

AUSTRIA
We're barely in the border, but Dad really wanted to say he'd been to Austria, since we were so close, and I agree with him. Mostly, it's very cold (we're technically "in The Alps") and raining a lot. Yay.
Briefly woke for 30 seconds when Mom and Matt announced to Dad that we'd finally reached the Austrian border and had left Germany. There's a post by the road to indicate this. Went back to sleep.
Our hotel had no elevator, and we were on the third floor. Everyone helped haul stuff up, but and Matt turned into a Super Hero and somehow lifted the heaviest bags up by himself.
Laid down for a nap as soon as we checked into the hotel, around 3:30. Matt and Dad went off to wash clothes, but couldn't find any place. Mom (still cold) tried to get warm under the covers.
Matt woke me about around 6:00. Could have kept sleeping all night, I suspect. We drove 5 minutes or less (avoiding as much of the cold downpour as possible) to a parking lot near some restaurants. The first restaurant was buffet, but they weighed the meat to figure out how much to charge. There was another method for the price of the salads and veggies. Too hard for Matt to decipher, so we went around the corner to the bar.
Smoky (Matt said Austria hasn't declared "smoke free" zones, like in Germany). The place we ate was clearly a local bar. Matt wondered how often they get tourists. Our waitress spoke a bit of English, so between our smattering of German, we got along fine.
For dessert, Matt ordered the Austrian special chocolate cake (a bit dryer than American), Mom had the white cake with whipped cream and alcohol, Dad had a white Napoleon. I politely tasted a bite of each. Blah. I enjoyed my choice – a scoop of chocolate and scoop of vanilla ice cream (with 2 cookies). The chocolate ice cream also had some chocolate bits in it. Mmmmmmm…..

Back at the hotel, prepped for tomorrow. Matt drank another beer while reading as I worked on the PC. I asked which of the “monk beers” he likes best. He likes any of the darker beers more than the lighter colored "light" beers.
I looked at Hotmail – nothing. Praying it means Passengers isn't casting yet. Rather glad The Easy still doesn't have a start date. Last night I prayed I auditioned for an indie (which I got immediately) and a new TV series Bob Frasier was producing (hadn't auditioned yet, but was in high hopes after nailing the prior audition).
Read IMDB News – Dennis Hopper died. Typed Diary. Dumped photos into the computer and organized them, then got ready for bed while everything backed up. Read a while. Got to bed around 11:00.
Posted by Diane at 9:11 AM