Got 8 hours of sleep last night. Helped. Matt got up before me and took the computer downstairs. Said he found a motorcycle he asked Roger to buy for him, if it hasn't been bought already. Walked back up the stairs to get my folks. I haven't taken the elevator yet. I just walk up and down the 4 stories. Breathing a little harder at the top, but I'd rather move than wait for the elevator.
We walked downstairs. Slim pickins in the meat department, but then our server came and asked if we wanted eggs. She didn't think I understood her when I asked for 3 eggs, and had to cook extra, but I appreciated them. Ate a croissant with cheery jam. Still needed more food, so ate about a cup of cereal (which is pretty dense). Real milk and sweetened with the rest of my cherry jam. Everyone is eating more than usual, but we're walking it off. European Vacation is definitely my favorite diet plan.
Before we left our table, the gal working the dining room told us she was from Romania. She didn’t understand "United States" in English or German, but she got "America". She gave us 4 apples to take upstairs, so when I went back down, I let her select an American candy.
More rain today. The locals absolutely can't believe it. Matt said he was told it's flooding in Poland and parts of Germany. At the end of the day, the raindrops grew bigger, and fell faster. Matt was tired of being wet. Cold too. Not as cold as Eagle's Nest (thank God), but certainly not summer weather. Wore Mom's raincoat over my head and backpack, like a cape, to keep the rain off. Really glad I had it when it started pouring in the evening.
Matt and Mom figured out the subway system. Matt thought it was funny that they include tickets for dogs. Later, Mom asked if I wanted to learn. I have no interest. Mom said she doesn't feel secure unless she can get places, on her own. I trust Matt. I’m not going anywhere on my own, so no need to figure out the subway.
I tried to sit when I could, during our trip, to preserve my feet. My backpack weighed a ton. Pressed on my shoulders and back because I was carrying a full 2L bottle of water. Fortunately, we checked our bags and jackets at the museum. 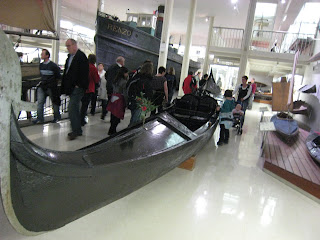 Filled with real (and really big) boats, ships, planes, helicopters (including the first functioning helicopter, from 1936), a real sub cut in half (a U1, the first German sub, from 1901 – been in the museum since 1921), rocket propelled car and sled from the 1920's (inspired U.S. and Soviets for space travel), steam engines, other engines….My grandpa would have spent many happy days the various rooms demonstrating mechanical stuff.
A miniature train set takes up half a room. The person running the switchboard made the streamlined, newer trains go faster than the older trains and kept track of 4-5 trains running simultaneously.
There's a robotics area, with various robots built in the last decades.
The toy section contains toys from the 1800's to more modern creations. Most of them are blocks, erector sets, Legos, and similar things. There's an incredible church built from a combination of sets. It's three feet long and nearly as high in places. Even the inside is fancy – little blocks to create fancy floors, and a cross you can see on the altar. 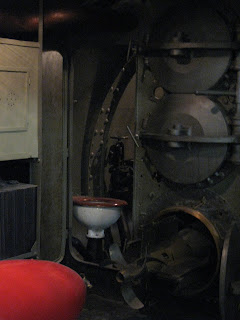 The glass section included a glass blower, doing his thing. He worked behind a counter filled with his little animals, snowmen, and jewelry - for sale, of course. Matt suggested I look at the earrings, and I selected two blue pair. Deeper blue leaves, and a pair of lighter blue balls with clear tiny balls around it.
We ate lunch around noon, then toured the rest of the museum. 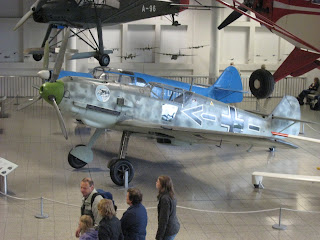 ASSAM CHURCH - Officially called - Church of St. Johann Nepomuk ("Matt's Church")
About 10 years ago, Matt was working in Germany, and the German he was working with asked Matt if he wanted to see something most tourists would miss. Matt followed him through the maze of streets to this church, and Matt took a picture of the address, but couldn't ever find it again. I put the photo in my photo album, pulled it out before our trip, which allowed Matt to find the church again. He’s wanted to see it again for the last decade. Crammed between two other buildings, it’s not very wide so it blends in. But when we walked inside, our jaws sagged. It’s fancy beyond belief. A lot of beauty crammed into a small space. 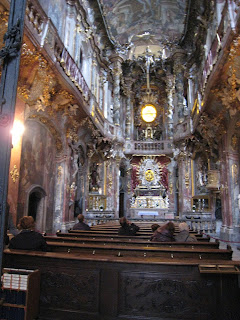 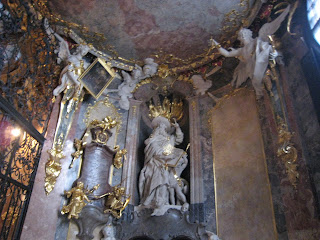 From Wikipedia:
Built 1733-1746 by the Asam Brothers ("Asamkirche" in German).
Munich's Catholic Church of St. Johann Nepomuk, better known as the Asam Church, was built from 1733 to 1746 by the brothers Egid Quirin Asam and Cosmas Damian Asam as their private church. Due to resistance of the citizens, the brothers were forced to make the church accessible to the public, though they had taken on all the costs of building. The Asamkirche is one of the most splendid achievements of Bavarian late Baroque architecture or rococo. It is framed by the Asamhaus (Asam House), built in 1733, on the left and the Priest's House (built in 1771) on the right. The church is in the Sendlinger Straße only a few minutes walk from the Town Hall in the centre of the City.
The ornate facade tells about the deeds of St. John of Nepomuk. The ceiling of the church is decorated by magnificent paintings and gold trim, and the high altar shows the Chair of Mercy Group, with God the Father and the crucified Christ. Ignaz Günther created the two angels of the fraternity altar in 1767; they were acquired and added later.


ASAM-HOUSE (Asam House)
Built in 1734. Immediately to the left of the church. Where the brothers lived, next door to the church. It’s likely the church building was once part of their own house, before they turned it into a masterpiece.

I thanked a nun standing outside the church. She talked to us in German even though she knew we were Americans. She lives above the church and locks it up every night. She couldn't believe the weather either. Hoping for sun soon. She asked how long we were in town, and if we were staying in Frankfurt. We told here we’d only be there one day. Such a nice woman. Looked directly into my eyes. Matt and Mom understood more of what she said, but I got some of it. What a treasure!


We had 70 minutes until the glockenspiel went off, so we wandered and hung out. Seeking shelter from the pouring rain and cold where we could.

FARMER'S MARKET – "Viktualienmarkt"
We walked to the Farmer's Market. On the way, I took a picture of a cool fountain. Mom and I took pictures of animals made from plants. Very cute. Hedgehogs, owls, chickens, etc. 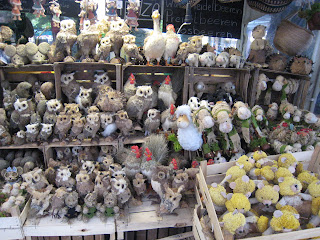 We ate pretzels. Mom and I sampled, then bought some dried fruit. I learned that kumquats are just very small oranges. Took a picture of a big mouthed fish in a fish shop. I asked a local manning a stall, in German, if some water coming out o a faucet in the middle of the market was good to drink. (Earlier I watched someone slurp some) and was assured it came from a well. I was out of water, so filled my small bottle. Delicious!


MARY'S PLACE (Marianplatz)
Took pictures of a fountain with a big fish.
There’s a tall statue with a golden Virgin Mary at the top, which was moved here in 1638 from Frauenkirche, to thank the Swedes for not sacking the place. The bottom has cherubs fighting against the four great Biblical enemies of civilization: the dragon of war, lion of hunger, snake of plague and disease, and rooster-headed monster of heresy (Protestantism). The serpent being stepped on represents "wrong faith" (Martin Luther).
Matt took me through the New Town Hall, where there was some cool architecture, as well as a neat tower hiding in the back.


NEW TOWN HALL (1867-1908) GLOCKENSPIEL – 1909
Huge stone building that looks like a church. 40 statues of town nobility and royalty that were carved in 1900.
The glockenspiel only runs a few times a day. Rain poured down on the watching crowd (amazing how many tourist idiots like us will stand in such crummy weather to watch the glockenspiel do its thing). Survived WWII bombs. Restored in 2008 (100 year anniversary). 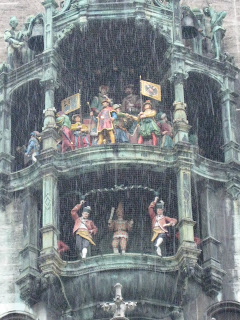 There are 32 live-sized figures in the glockenspiel. The upper section recreates a royal wedding from the 1500's. The Duke & his bride watch Bavarians (in white & blue clothes) beat their enemies. Two knights run at each other. The second time around, one knocks the other back. When the stop figures stop moving, the lower ones start dancing.
When the figures at the top stop moving, the lower section starts up. Barrel makers dance and twirl while the music continues to play. (Historically, they really were the first to come out and dance after The Black Plague was over.)


As soon as it was over, we split for the subway, rode it back to the hotel, got rid of most of our stuff, then ate dinner at the same place as last night. Ordered the same cheese spread, and were served a basket of pretzels that we weren't charged for.
Mom said Tony, Grandpa's brother, worked on trains before WWII, which made him valuable. Because he understood German, he'd hang out around Germans and listen as an American, then report what he heard to his commanding officer. He helped make sure the trains ran during WWII. After the war, he'd come over or call Grandpa and talk into the early morning, and Grandpa would listen, even though he had to get up at 6 a.m. It was Tony's way of processing.
Posted by Diane at 9:43 AM