Woke at 5:00, laid in bed an hour. Starving! Went downstairs to eat breakfast.
Ate fried eggs with a medium croissant and a small roll. Enough to take off the edge, then went back to our room for an hour. Matt was pissed when he learned I'd eaten, because he didn't think I'd be able to get back in the dining room, but I’d told the gal I was going to find my husband, and then come back, and she didn't mind.
Reorganized my big suitcase. Downloaded photos to PC. Worked on Diary until time to leave for breakfast - already starving. Smugly happy there was no problems getting in for Second Breakfast. Ate about 3 scrambled eggs, bowl of cereal, 2 smaller bowls of fresh pineapple. There’s nothing like fresh pineapple. Droolingly delicious.
Our longing to see more of each other was expressed as Peter kept trying to persuade us to go to back to their home near Zeigan. Our response was asking them to visit Seattle. Peter wanted Mom and Dad to stay another week in Germany (with them). I suggested they met up with us after dropping Mom and Dad off in Frankfurt today.
That conversation led Matt revealing had no idea his mom wrote his dad every day he was in the navy. Mom said Grandma wrote her every day her first year of college, so she wouldn't be so lonely. Mom tossed most of those letters while still in college (no room for storage). Now, of course, we’d do anything to have those dear letters. So glad I’ve kept every letter anyone wrote me. Even notes from elementary school.
Peter told Dad to talk to him in his right ear, because he can't hear in his left ear. I piped in the deaf ear was the ear Marlies was supposed to talk into and everyone laughed. We headed up to our rooms. Matt and I packed up our stuff, then went to help the others and say goodbye.
Peter wasn't successfully hauling his heavy suitcase, so I snagged it and had no problems dragging it behind me, using the strap. Marlies trailed behind Peter. Peter took her heaviest bag (and it weighed a ton – filled with water, shoes and other stuff).
Matt, the packing expert, loaded everything into the back of Peter's car. Took him a few tries to get it right, but he did a great job. Then Marlies somehow crammed their rather large bag of dirty clothes into a crevasse between a suitcase and the side of the car.
Mom and Marlies sat in the back. Peter drove. Dad beside him. Hugs goodbye. Peter and Marlies will drive 3 hours to get my folks to Frankfurt, stopping to see something for an hour, then my folks will stay overnight at the hotel, and Peter and Marlies will drive 90 minutes to their home.
Matt and I went upstairs to snag some stuff, then split for Frauenkirche, noticing how much the swollen river has receded since we first came here. Much lower than last night.

FRAUENKIRCHE – CLIMBING UP TO DOME 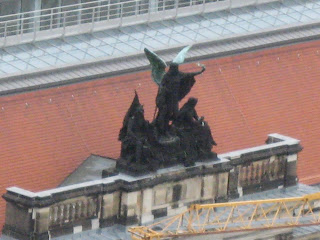 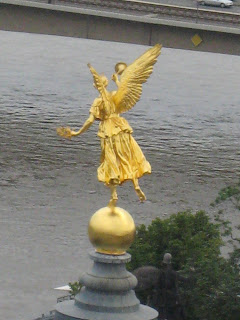 Took pictures inside, as we went up, then more of pretty building spires on the surrounding buildings. 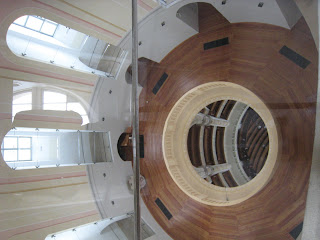 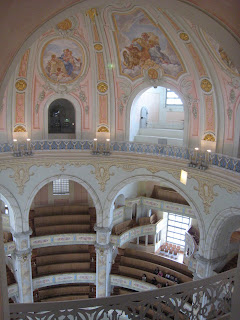 We walked back and I spent an hour frantically typing mostly yesterday's Diary. Be nice to catch up by the end of today. Spent nearly an hour doing that. We checked out, left our bags with the front desk, and had lunch at an Italian restaurant. I had a salad with chicken. Matt had a spinach ravioli and let me have a few bites. There was some bread, but I left starving, wondering if I’ll stay hungry until we get back to America and I’m not walking around all day.
Getting a little tired of being hungry most of the time, but I’m not gaining weight. I'm trying not to overeat. 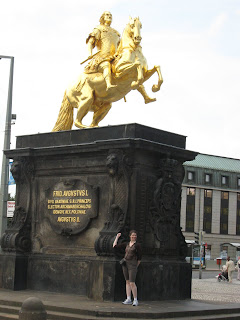 GOLDEN RIDER – Augustus the Strong – gold statue
Matt took me to the famous statue of Augustus on his horse that I've only photographed from a distance.
I took a few photos of some surrounding pretty stuff (FOUNTAIN, GREEN BASE OF POST), then sat and looked for the name of the golden statue in the Rick Steves book while Matt found an ATM.

When Matt came back, he pointed to an interesting clock, so I checked it out but didn't photograph it. It's relatively new, and not interesting enough. 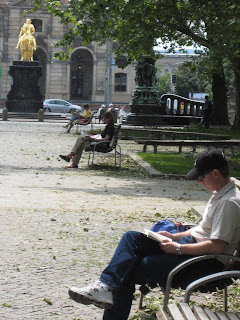 Did take a precious shot of Matt reading on the bench, waiting for me, with the Golden Rider behind him.

Matt bought us ice cream, which finally killed the hunger. He got the P.B., which I didn't know existed because I couldn't read "nut" in German like he could. He gave me a taste. YUM!
We walked back to the hotel and hung out in the lobby for a bit. I looked through today's photos and deleted a few. Then we snagged our bags and hopped in a taxi that took us to the train station. Germany has "stupid lights" like we do. (No cars, and yet the lights are on timers, so traffic doesn’t move.) Pissed off the driver, made Matt laugh, and we all realized it must be a universal thing.
At the train station, I got to sit on a bench and finally work on making sure I'll be able to understand my hand written photo notes. We moved to the train platform and I started hunting for pictures of my New Green Vault descriptions in the book Matt bought me. Finding about half so far. Not bad.
Our car on the train to Berlin was absolutely roasting. No AC and it was probably around 90. No breeze. Nothing. I ate and worked on finishing up Diary from today and yesterday.
Finally finished Diary catch up from my memory. Still need to add Rick Steves notes but that's easy. SO HOT. I checked out the First Class car ahead of us and it was cooler, so we moved and shared an enclosed group of seats with 2 guys from CA.
Matt helped me sort photos from June 5 (most of them). That helped. I sorted June 6 and took a break. We were nearly at the station anyway, so it worked out fine.
We moved out of the cooler car and back into the hot one, which had an exit. Talked to an old man in German. We complained about the heat, and he said over the next 2 months, it'll get much hotter. Blech!

WEST BERLIN
It was hot outside the train too. We walked about 20 minutes to get to our hotel. Matt admitted later that he doesn't want to walk any longer than that, with all our luggage. I sat and drank water while Matt talked to the hotel desk clerk.
The hotel is a tricky place. Can't exit unless you take the elevator. Getting into our room requires laying our key over a round electronic receptor on the door, then turning that knob with one hand while pulling on the door handle.
The room comes with a sewing kit. After just resting on the bed for 5 minutes, I sewed the growing rip in the top of my backpack. Just a few inches long, but it's grown over the last week from a tiny hole to something longer. I also snipped the frayed bits inside the backpack and did a little reorganization to create more room.
Matt claimed we couldn't use the fridge because removing anything would result in getting charged. Well, duh! I suggested keeping everything in the fridge and use the space that's left (there’s plenty)
Asked the hotel desk lady for restaurant options. She asked what we wanted to eat, and Italian sounded good. It was on the other side of the block and hired real Italians – cooks to waiters, so I flipped into speaking Italian (learned before our Italy trip 3 years ago). They appreciated it, and were so kind to us.
Chatted with our waiter. He spoke English and moved here 7 months ago, following his German girlfriend, who is going to school here. German is really hard for Italians to learn, so she's learning Italian.
Matt ordered us an appetizer that was delicious round bread. Best I've eaten in Germany. Soooo goooood. I had seafood in pasta. Matt ordered lasagna. I ate about half. Not starving, not full - just right. After my meal, I went to the cooks' window and said, "My compliments to the chef," in Italian and they BEAMED. I bet I made their month. Cooks don’t get enough compliments.
The waiter thoughtfully stuck a plastic fork and spoon in the bag with my leftovers.
During our meal, I was reminded that Matt's been here, in Berlin, about 5 times, working for his Swiss client. He hasn't seen much of the city though. He's been on the walking tour we're doing tomorrow (in spite of the fact that it's supposed to be even hotter than today).

West Berlin is very modern, but with a communist feel to it. Crammed with buildings and cars. It’s a modern city.

Back at the hotel, I ate half the delicious berry pastry Mom bought me yesterday. WOW! Best pastry I've eaten in Germany. Matt did Soduku while I ate, prepped for tomorrow, and got ready for bed. I got on the computer and did Diary while Matt watched TV.
Sorted photos from yesterday as well and older ones I’d not had time to organize. Ah! Better!. Matt rubbed my shoulders before I went to sleep around 11:00 I think. Felt good.
Posted by Diane at 7:57 AM