Marlies and I went down the elevator at the same time. Peter was already at breakfast. Huge variety of food, but only warm (?!) mineral water available, in small glasses. Breakfast was good (couldn’t believe how much I had to eat to fill up).
Marlies helped me as I worked on my German (she made sure I had all the right endings on the word variations). She hunts for the correct English word quite a bit, and sometimes uses pantomime plus the German word. Most of the time, we communicate just fine.
Dad wanted to walk. Matt returned the car. Peter went to smoke. Mom, Marlies and I talked. Marlies's mom and Gma. were a lot alike. Huge garden, lots of flowers, picked their own fruits and veggies, made jams, cakes, and other good stuff. And both houses they lived in are gone. Property sold and the land transformed, which just kills us and makes us sad. I nearly cried.
Mom talked about how Grandma loved harvesting walnuts, even when she couldn't see. She'd grope around under the trees, finding nuts. To crack them, she'd hold the nut on one end, then hit the top with a hammer.
We finally headed upstairs to get ready for today’s journey then met in the lobby. Marlies wanted her sunglasses. There was debate over whether she should walk 5 minutes to the car and get them. More discussion over whether Peter should walk or drive to the train station. We finally waited while Marlies got her sunglasses, Peter's cane, and a bag of nutty cookie things (which we ate most of on the train).
We walked and talked to the train station. I stopped to take a photo of a…. 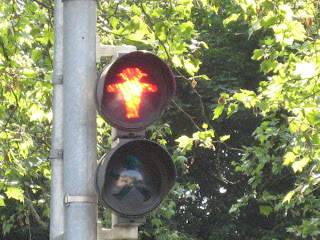 GRAMD BUILDING BY OUR HOTEL
Matt thinks it might be a museum. 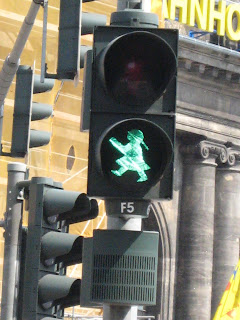 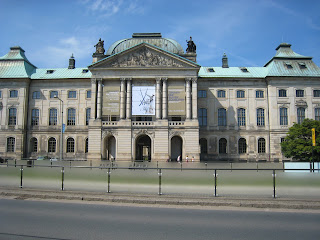 FAT MAN TRAFFIC SYMBOLS
Matt showed me an older communist-Germany traffic light, with a fat man symbol indicating when pedestrians should stop, and when they can cross.

At the train station, Mom and Dad got tickets, then Peter and Marlies, but it took them forever because Peter can't hear so good, and neither could the clerk. Matt and I shared a delicious almond pastry.
Finally everyone had a ticket, but then Peter disappeared while we waited. He reappeared from the entrance, having snuck out to have a cigarette.
Once on the train, there was confusion (by even the Germans) over when to get your ticket punched and worrying that because we didn't, we'd be in trouble. We were fine. I read up on where we were going, finished deleting photos from yesterday, and learned more German.
I used my "It is all sausage to me," phrase, which I learned in a Smithsonian article about the diminishing butcher shops. Peter and Marlies laughed, but then I learned that the word I used for "sausage" is actually sort of crude. Peter uses it all the time, much to Marlies's frustration and embarrassment. Good thing I wasn't throwing that phrase around with anyone else.

We took a ferry across the river, then Matt and I set off to walk up the trail to the top of the mountain, while everyone else went to the beer garden. 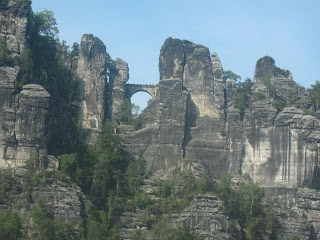 SAXON SWITZERLAND ("Sachsische Schweiz:) NATIONAL PARK
This isn’t part of Switzerland, but many think so. There's a lot of "just sandstone rocks" that look like castles from the1300's. The sandstone was used to make the Berlin Gate. In 1982-84, some of the stuff was reconstructed, while archeologists dug down and confirmed people lived here.
I took pictures of tiny people were on top of some of the rocks. 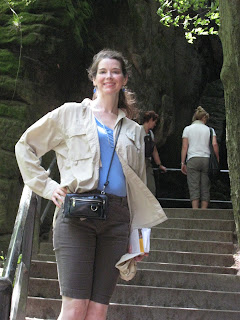 It was really hot and we were outside, in nearly 90 degree weather, walking, and standing. The 30 minute walk was mostly, but not always shaded. Part of the trail led through the forest, where a man standing near the trail sang beautifully in German. Just his voice, ringing through the trees. Lovely!
Took photos of rocks that look like ruins from the train tracks, and as we walked up. Someone turned an old castle into a hotel. 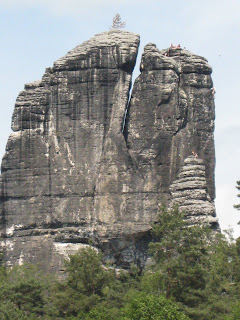 ONE TREE ON HIGH ROCK – tall rock, with just one tree. On the way back, there were two people standing next to the tree. (More crazy hikers.) 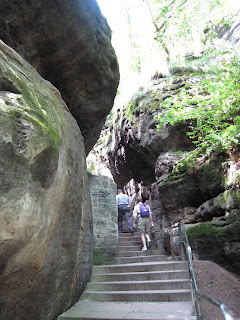 Various side paths led to the top of rocks. From behind the rail we looked out over the towns (white roofed rectangular building is the beer garden where everyone else was hanging out), river (which was a dirty brown, moving faster than normal, and swollen from the recent rain), and surrounding rocks. 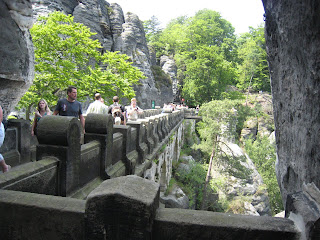 BASTEI BRIDGE – 1851 – Created purely as a romantic lookout. First scenic photos of the area taken there. One side of the bridge allowed us to look over the… 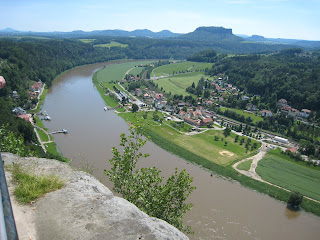 ELBE VALLEY – 900 ft. below.
ELBE RIVER
FORTRESS KONIGSKIN – At the top of a far hill, the river flows around it – great place to build a lookout fortress. 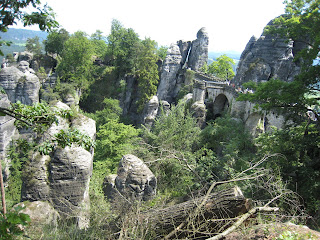 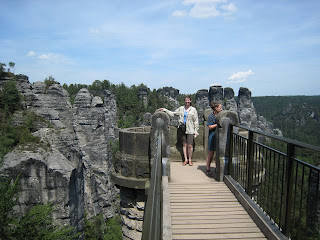 We made it to the top, which had a few shops and cafes, including a
HUNDEBAR – with 2 bowls for dogs to drink out of.

2002 FLOOD
Matt bought me postcards with great photos of the bridge and one of the 2002 flood. 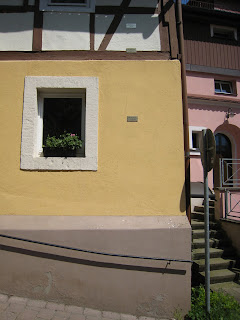 Walking back through the village, there was a building with little metal signs on it, showing how high various floods through the centuries hit – including the 2002 flood.
Matt suggested we walk to the beer garden. I had no idea it was so far (10 minutes walk in the 90 degree weather). No shade. No one in the beer garden.
Matt bought and ate a hamburger. None of the sandwiches appealed to me, so I got ice cream (but the bar left me hungry). Rested on a bench. Matt snagged a beer and bought me a bottle of cold, regular water. I nearly cried, it was so delicious. I scarfed some jerky (desperate for protein), the last of Marlies's cookies (she gave them to me), and a bar.
Matt found Dad walking around. The others were inside, drinking iced coffee. Matt learned our boat wasn't running on the river, due to the flood, so we had to take the train back.
TRAIN STATION – Finally got a picture of everyone in one shot - Marlies, Peter, Mom, Dad, and Matt! 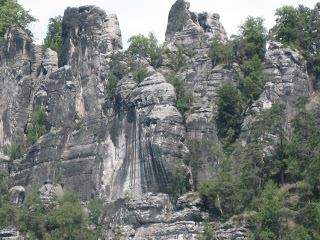 BASTEI BRIDGE
On the train ride home, Matt told me when it was about to appear, so I could snap a picture of it. Deleted photos during the rest of the ride.

Walked back chatting with Marlies. She knows the raw finely chopped pork spread we read about in Smithsonian. Said it was good, though not (as the article stated) necessary to get the meat from butcher. She prefers butcher meat, but it costs more, so she normally uses the store.
Finally got a picture of
GOLDEN HORSE – by our hotel

Back in our hotel, still hungry, I ordered food from Room Service. After I begged, Matt helped me figure out what buildings in Old Town Dresdin I took pictures of yesterday. (Usually I take notes as I click away, but didn’t want to slow anyone down as we wandered, so figured it’d be easy to do later. I was wrong.)
While I ate, Matt went for a swim. He came back, all excited. The smaller, hot-tub pool has a extra jet in 2 corners. You press a button and a downward pointing, 2-3 inch in diameter nozzle pushes water out. I put on my suit and walked to the pool while everyone else ate in Old Town.
Swam and worked out in the wonderful, 5 foot high water all over pool An African gal 10 years older than me and her German husband swam with me as we talked. He left. We kept talking and swimming. We both got cold at once.
I went into the shallow hot tub and tried the jet thing Matt talked about. Great massage! I used it all over my body. I want one in our house. Eventually, regretfully, I got out, showered, ate a snack, then typed notes on the PC until midnight.
Posted by Diane at 12:06 PM