Matt and I woke up at 6:30. I got up first, hoping to eat and work on the computer. Matt couldn't go back to sleep and said he'd get up and follow me downstairs. No fresh pineapple available today (nothing beats fresh cut pineapple – addictively delicious). Ate scrambled eggs with a slice of cheese on top, about a cup of cereal, and a few pastries. Trying to keep from getting hungry.
Matt joined me before I finished. I was reading the final story in the sci-fi short story book, so read the last few page. Now we can leave it in the hotel. We buy used books to read on trips for this purpose.
When Matt came in the room, put away the computer in a flash and impatiently watched him strip off his clothes. ATTACK! I believe I’m finally getting my normal energy back. ;-)
This time I took photos of the buildings across the river so it was easy to figure out their orientation and identify them. I discovered part of my confusion was that the Zwinger and The Royal Palace (or Residenz) are both palaces. I was calling both buildings "the palace". Matt didn't have reference points when I just shot photos of steeples.
In Old Town Dresden, all the cool buildings are mostly in a clump, with one hiding part of another. Usually, when traveling in Europe, the individual churches/museums/old buildings/sites are separated. Require planning to get to each one, so it’s easier to keep track of what I’m photographing.
Mom and Matt helped me identify the buildings I’d photographed, but there was some frustration involved. 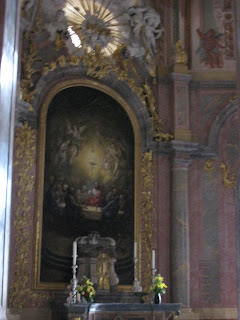 HOFKIRCHE - HOF CHURCH – INSIDE - Rebuilt after WWII. Went inside and took photos. 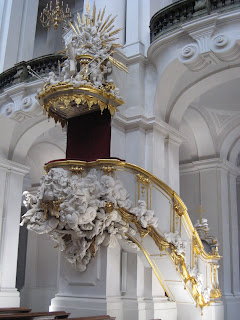 PULPET is the original (hidden in the country by locals before WWII bombing). 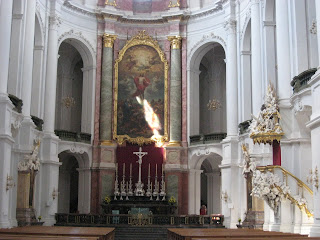 MEMORIAL CHAPEL (facing rear of church, on the left) – dedicated to those who died in WWII bombing. Altarpiece made in 1973 out of Meissen porcelain.
There’s also a crypt where Augustus the Strong is buried but we didn't go into it.

I asked Marlies when the church was reconstructed. Figured she’d figure it out from the information posted around the church in German. Instead, she bought me a little book about the church in English instead, as a gift, which made me feel bad, but how could I refuse it? (Matt later called her his 3rd mother, because Peter and Marlies are so much like our parents.)

RESEDENZ – THE ROYAL PALACE – Rebuilt after WWII. (Actually, they are still rebuilding it.) After leaving the New Green Vault, I took pictures of the inside section, where 3-D drawings cover the cloth hanging from the roof to the ground. They're painting the designs on now, and then they'll carve them. Some photos inside the palace show how they are recreating the gold-covered wood used to decorate the inside. 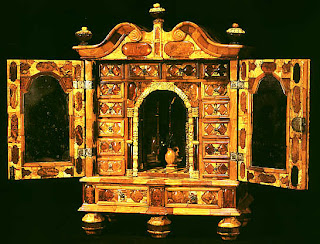 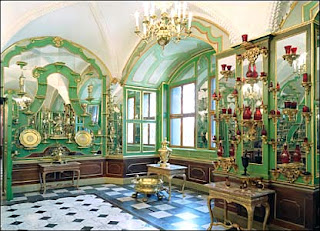 We picked up our reserved tickets for The Green Vault, turned it in to get a flier, and showed the flier to the people handing out the actual tickets. Then we waited for our tour time to be called. Every bag, including small purses, every jacket and even Peter's vest had to be checked in. People walked, a few at a time, into an enclosed area that vacuumed dust up. Couldn't feel the suction or anything though. 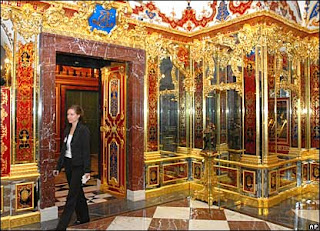 After our tour, bought a book with pictures of some of the items I really liked, plus postcards of the rooms. I also got a bookmark with a picture of some porcelain flowers in the New Green Vault - very similar to the lifelike, porcelain bouquet on the King Ludwig's "magically setting table". YES!

We ate a quick lunch, because we wanted to see The New Green Vault. I volunteered to go back in side and ask someone inside if we had to get new tickets (yes) and if they were easily available (yes).

THE NEW GREEN VAULT – Reconstructed. No photos.
Matt made sure I didn't lose myself in the exhibit, examining each detail carefully, losing track of time, and everyone else. (Instead I wrote info. about each item I wished I could photograph, so I could get pictures from books or the web later). He also made sure I saw the two most impressive objects: 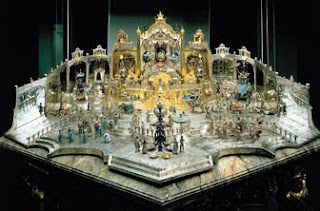 *Green Diamond – 41 carats and part of a hat brim or agraffe composed of 2 huge diamonds and 411 others. The large diamond is light green because it was exposed to radiation.
We got a book with pictures of some of the super cool object I like. I’ll use the internet to find the rest of them or buy books featuring the main artists who contributed to the collection.

We ate at a nearby restaurant, a little pricy, but I was starving (again). Ate a large slice of quiche. Still starving. Ate 2 big scoops of chocolate. and cherry ice cream with cherry "salsa" and whipped cream. Some sort of egg liquor was drizzled over the top. Marlies said was very good. (I couldn't even taste it because the flavor was lost in the rest of the dessert. Peter gallantly kept offering to keep me from eating so much ice cream I'd grow a big belly like his. While I kept chowing down, I gave him dirty looks and told him “No,” in German, which made everyone laugh. The dessert finally killed off my hunger. Better!

Marlies really wanted to see the porcelain in the Zwinger museum, but it was closed. We did however, go to the Zwinger….

ZWINGER INNER COURTYARD – Reconstructed.
Took photos all the way around it, plus close ups. Peter took pictures of us (using his still and video camera), and we got one stranger to take photos of all of us. Mom and I also took photos of the others while we were there. (It was Peter's idea to find a pretty place to have behind us.) 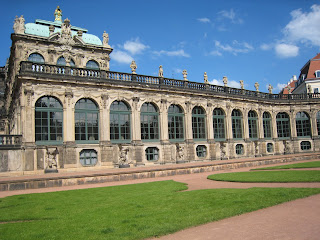 CROWN GATE – 4 eagles support a crown (the eagle is a symbol for Poland). Loved the Crown Gate.
Big entryway to the right is the 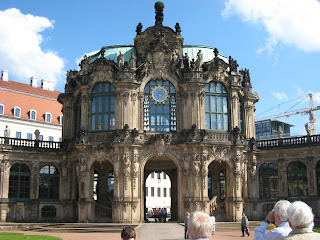 RAMPART PAVILION "Wallpavilion" – first wing of palace.
Crown shaped building capped with a sun pavilion for Augusts' orange and fruit trees.
At the top is Atlas (with Augusts' features)
Opposite it is the 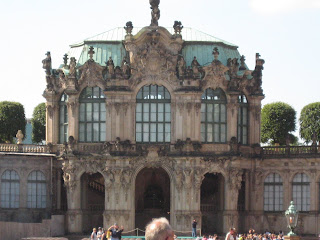 GLOCKENSPIELPAVILION – 40 bells of Meissen porcelain play a 3 min. song every 15 min.
(Mom loved the music!)
Location of the porcelain collection Marlies so wanted to see.
Across from the Crown Gate is 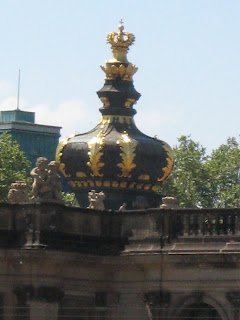 SEMPER GALLERY – built 100 years after the rest of the palace by the same guy who built the Opera House. 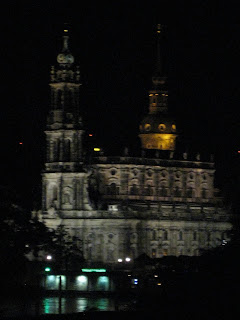 OPERA HOUSE – from the square by it, I took pictures of all the buildings around me, starting with the Opera House. Opera House
King John on his horse – statue
Hof Church
Residenz
White house (I think a replica of a house in Florence for the Hof Church artists from Rome – while they constructed it – to make them feel more comfortable.)
Zwinger
Albertinium – behind left side of the Hof Church. King John on left, Hof on right, Albertinium in center.

The men went off together, and we women walked to a shopping mall because Marlies and Mom wanted to buy stuff. Mom wanted to get souvenirs and chocolate. Marlies kept searching for a specific store.
Mom bought me a 5 inch diameter pastry with berries on top. We didn't stop moving, so I didn't eat it today. Mom waited outside while Marlies and I went inside the grocery store she was looking for. She bought a 6 oz. bottle of the egg liquor I’d been so curious about earlier – one for Mom and one for me. Marlies!
There were also some cute kids doing ballet on a stage in the center of the mall. We watched some 6 year olds. Later Marlies got excited when she heard Greek music and hauled us back over to watch some older kids dance (all girls, except for one boy). Marlies used to do the Greek dance when she was younger.
While Mom was shopping for stuff to give friends, Marlies showed me the grocery carts. They are chained in place and cost 1 Euro to use. (Great way to make extra money and keep shopping carts from getting stolen.) There’s a hook to hang your purse or a bag from plus a magnifying glass (the latest thing on German shopping carts) so older people can read tiny print on items. Brilliant!
Peter called her cell, to find out where "the ladies" were. Matt took Peter (and Dad) to see the inside of the Frauenkirche. Matt later said he saw some tears in Peter's eyes, because the church is so amazingly beautiful.
On the way back to the hotel, we again passed the…. 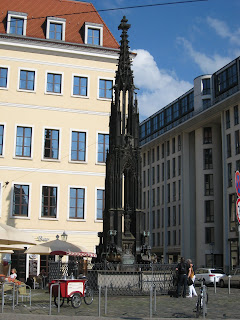 Marlies's knees were bothering her on the steps. So I looked out for her and tried to find the most “knee friendly” paths. Mom went back to her room to drop off our bags of stuff. Marlies and I found the guys in the second beer garden we checked.
Matt gave me money to get half a chicken – delicious! Around us, small fat birds begged for food. We talked and laughed. Dad gave me a book on Dresden, with photos, to help me figure out the buildings. So thoughtful!
It got cold, so I went to the hotel room (Matt walked me partway, so I wouldn't get lost).
On our way inside, we stopped, in spite of the cool weather to take pictures of the …….

The plan – more Moon Flower drinks in the hotel bar. Last night Marlies ordered a Moon Flower drink from the hotel bar and got hooked, so we went over to have a drink at the bar, so Marlies could have another Moon Flower. Mom wanted one too.
While waiting for our drinks, learned the various preposition words for people from Marlies. Marlies said people address each other less formally now than they did when she was growing up (particularly kids to adults).
Had a few sips of Mom's Moon Flower. It has a chain of flavors the mouth isn’t used to. Strangest drink I’ve ever had. Not bad, but so different, my mouth was always surprised.
Got ready for bed and really wanted to do Diary, but, because I love Matt and I've already driven him crazy, just wrote notes and will do it tomorrow. Also have notes in my "what I took pictures of" little notebook.
It was totally dark in the room when Matt opened one of the curtains, then called me to the window to look at the lights on the… 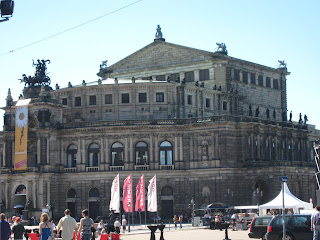 HOF CHURCH – Lights on the building, reflected in the river. Beautiful.
Posted by Diane at 7:35 AM