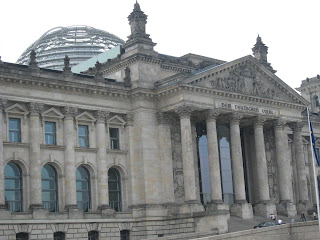 REICHSTAG & "THE BEEHIVE" – originally built -1894; burned – 1933, rebuilt – 1998
The Reichstag is the German parliament building – like our Capital in D.C.
When it burned in 1933 Hitler blamed the Soviets, but most suspect the Nazis framed them to grab power.
It was hardly used from 33-95, then covered in a tarp & scaffolding while being rebuilt into what we see today.
Visitors line up outside, waiting to be admitted. They let people go through the doors once the group before has been totally cleared and is past security. So we waited, right at the door, for 10-15 minutes.
Once the guard opened the sliding glass door, we waited to get through a second sliding glass door. All bags and purses are X-rayed, and everyone walks through a metal detector.
Warm inside. No air conditioning. So far NO buildings in Berlin have air conditioning. Like walking around in an attic. Miserable for everyone. Stupid.
Entry is free for everyone, and we snagged an audio guide (that automatically started playing once we started walking up the dome ramp). Took a crowded elevator up to…. 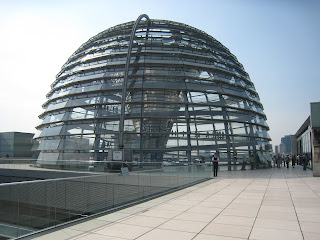 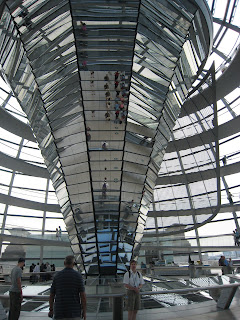 Light shines through all the "bee-hive" dome windows (bright and hot). We could view the roof and city from inside the dome. 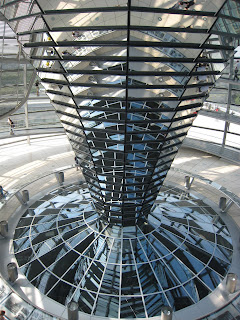 As we walked back down the dome ramp, I photographed downward views, which included German Parliament, in session. 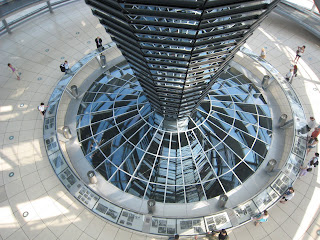 We walked out on the top of the roof. I checked my watch, before saying "Good morning," in German to a guard. He was chatty (probably bored), and didn’t speak English. He asked where we're from and how long we're in Germany and Berlin. We talked about the hot weather and he let us know there's a wonderful pool in Berlin.
Back inside, we had to wait, in the heat, for the elevator to arrive. The trip down wasn't as crowded. Again, we had to wait in front of the glass doors before we were allowed outside. 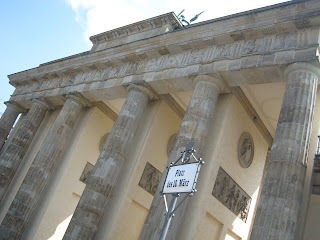 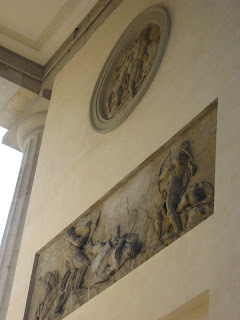 BRANDENBURG GATE (taken from the W. Berlin side), plus photos and text from a few posters by the gate.
Walked freely through the gate to…

EAST BERLIN
Like yesterday, during our walking tour, we were "attacked" by young gypsy girls asking, "Speak English?" So annoying. (We were told to ignore them completely. Yesterday, our tour guide warned everyone about them and that the best response was "No, I don't speak English," but I didn't even acknowledge their presence. If you talk to them, then they immediately try to sell you something and you waste time trying to be polite about turning them away. I wonder what their lives are like, at home.
We wandered into a souvenir shop and bought post cards – photos of bombed buildings, the burned out church, a few aerial views of the Holocaust Memorial, and a close up of the chariot on top of the Brandenburg Gate taken right beside it, from the roof.
HOT and stuffy. No air conditioning anywhere. Don't know how people bear it.
Matt waited in line to snag us sandwiches and icy cold water. I collapsed at a table, suffering from heat exhaustion. If my body is too hot for too long, without some relief from an icy drink or AC, I overheat. Matt calls me a “lizard” because I heat up and freeze so fast as a result of the surrounding temperature. Can’t help it. Really frustrating.
Feet throbbing (woke with them still hurting from yesterday), hot, breathing hot air, and inside wasn't any cooler, just stuffy. I wanted to burst into tears. Put my arms on a tall table and put my head down. Matt asked if I was ok and left the backpack so I could have some water. I told him I was just hanging on. Then I focused hard and pulled myself together.
Saw they had sandwiches. Matt snagged me a chicken sandwich (with deep fried chicken, which seems the main way poultry is served here) and an icy cold bottle or water "natural" – not mineral. I needed help getting the bottle open and then, relief! It was SO GOOD.
Matt snagged a large pastry and we sat in the back of the restaurant, which was more bearable once I sucked down some of the cold water. Needed to eat too. Slowly felt myself coming back to life as I downed the food and cold liquid my body needed.


POSTSDAMEN PLATZ "Parisian Square" – subway station
After Prussians defeated Napoleon, it was again filled with govt. buildings, which were bombed to smithereens in WWII. The Germans were unable to rebuild No Mans Land until the Wall fell. The banks, hotels, and embassies were put in exactly the same places they were in before WWII.

WEST BERLIN
Matt walked into a building, which I assumed was the Checkpoint Charlie museum (our next destination, or so he’d told me), but once I walked in, I immediately knew it was the …. 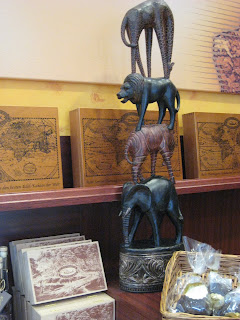 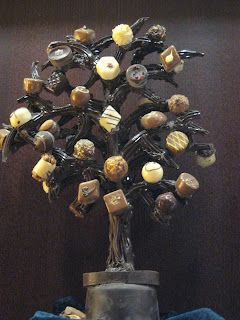 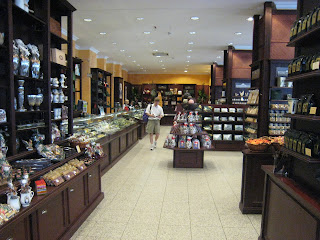 CHOCOATE STORE – FASCBENDER & RAUSCH
Claims to be Europe's biggest choc. store. 250 kinds of chocolates in a 55 foot long buffet. Family owned for 150 years. Along with an incomprehensible variety of chocolate, there are enormous choc. sculptures – The Reichstag, the Titanic, the super tall TV tower, a two foot high volcano that erupts choc. (took a video) every three seconds, a four foot high "Berlin Bear", etc. 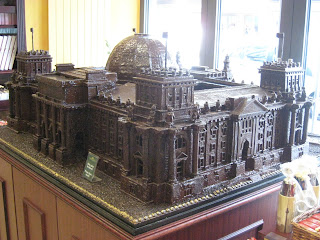 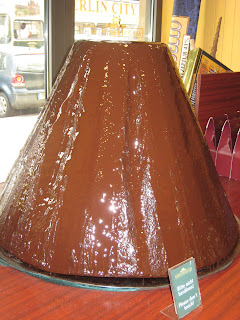 I took pictures (they don't mind, even if you don’t buy chocolate), then asked Matt where the liquor filled chocolates were. He pointed it out and helped me translate what was in each choloate. We selected 5-6 and ate them as soon as we got outside (so hot, they were already melting). Matt would bite a chocolate in half, then hand the rest over to me. Some were better than others, as in “WOW” verses “not bad”.
Finally, we arrived at the…..

CHECKPOINT CHARLIE MUSEUM – MUSEUM OF THE WALL AT CHECKPOINT CHARLIE
When the Wall was up, each gate between East and West Berlin was given a letter – A, B, C, D, etc. In the military, to clarify letters, the military uses a word the the letter it starts with – “Alpha” gate was at the East-West German border, “Beta” as you enter Berlin proper, “Charlie,” “Delta,” etc.
The “Charlie” gate was used more than the rest, allowing foreigners in and out, with Americans on one side of the gate and East Berlin Germans on the other. It became known as "Checkpoint Charlie." (The German side was WAY more intimidating. Longer, multiple places with guards – really nasty.) 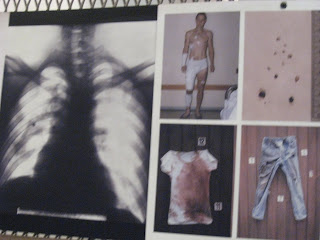 The museum was created by someone who wanted to make sure Germans never forgot how awful conditions were when the Wall went up. It existed long before The Wall fell, and stood right next to the E. Berlin boarder guards. Drove them crazy, but there wasn’t anything they could do. The museum was a real eye opener about how loved ones were separated and risked their lives to be reunited in West Berlin. They came up with many clever methods of escaping. 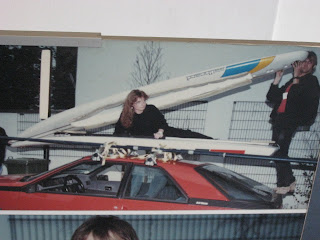 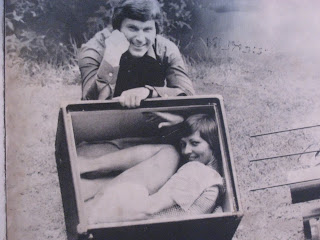 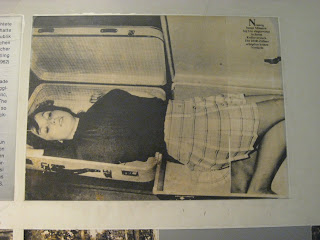 Before people exit the museum, the final exhibit is a car that’s black outside and inside. Visitors are invited to try and find the person hidden in it. Matt patted the front seats, and checked everywhere. I laid down and looked under the car. Someone finally found that the passenger seat was dug out and the black cover was over the mannequin (representing the real woman who escaped E. Berlin with her boyfriend).
I couldn't believe the heat. There were 3 floors, each hotter than the last. Matt and I wandered separately, though when I finally went upstairs, Matt led me to the two most spectacular hiding place exhibits. Then we went downstairs and finally to the cooler first floor (probably "only" in the 80 degree range). I felt better about being so uncomfortably hot when I noticed the guy behind the counter was also dragging from the heat. It's too hot for everyone, even the natives. Crazy not to have air conditioning!

Matt snagged me another cold bottle of water from somewhere, which helped, then we walked around the block to an ice cream store and I got a scoop of mango and one of passion fruit. Sat on chairs outside the little shop and ate.
Another gypsy approached us. We ignored her. She saw the brochure, in English, sticking out of Matt's shirt pocket, and knew we did indeed speak English. She had a bag of water bottles. Matt lifted my empty water bottle and finally got her to leave us alone.
Walked into the blissfully cool subway (no A.C., just underground). Could not believe how crowded the train was. Insane! 2:30, and we were packed tightly in the super hot, stuffy air. It was frigging awful. I didn't faint, but only because I worked at it. The trip went on and on and on and the air was so hot and there wasn’t even room to even drink water. It was probably a 15 minute trip.
After getting off the subway, I collapsed into a seat. Matt sat beside me and handed me a bottle of water. He drank from the other one (and offered to buy me a bottle of cold water, but what we had did the trick).
The walk back to the hotel seemed to take forever. Matt went to the store for food and a beer while I took a lovely cool shower (and washed my flip-flops again). Ah! Better! Charged my camera battery, wrote a list of what to work on today. Started on today's Diary and Matt arrived with food (including more of the crunchy-chewy candies we enjoyed).
We ate, read, rested. I told Matt not walking as fast as him, getting too hot, and failing in any way to match or meet his own abilities and expectations makes me feel like a failure as a wife. I’m not good enough for him. It doesn’t make his life better. He denied I had an adverse affect on him. How did I get such an amazing husband?
Matt asked me to select what to do tomorrow, and so I looked through the chapter on Berlin and picked what sounded most interesting. Matt approved. Worked a bit on today's Diary and then suddenly got super sleepy and had to stop and nap. Damn. Fortunately, I only slept 30 minutes.
Matt went off to snag a hot dog (sliced into little pieces, with ketchup poured over the top, and eaten with a little tiny fork, served with a roll) and I woke myself up and did the rest of Diary for today. When Matt returned, he opened his second little bottle of wine and read on the deck. After Diary, sorted the post cards and stuff we picked up yesterday and today, so they were chronological to things we've seen and been to.
Ate a snack while reading another story.
Stretched calf muscles while Matt was watching TV and then he snagged the computer, so I stretched a few more leg muscles, prepped, and brushed my teeth.
Matt got an email from Mom that she and Dad got back to the U.S. Mom said she and Marlies cried and hugged and hugged and cried goodbye. Tough parting. Everyone knew it would suck.
I got back on the PC at 10:00 pm. Downloaded and sorted today's photos. Went through Rick Steve and added to today's Diary notes. Matt wanted the light out and it was nearly 11:30, so I backed up the most important stuff and turned out the light.
Posted by Diane at 9:44 AM